When you hear the term “fruit quality”, what comes to mind? Quality is often a subjective term. Fruit quality may mean something different to everyone—especially a breeder, a grower, industry member, or a consumer. We spoke to Rod Serres, Senior Manager of Agricultural Sciences at Ocean Spray, and Brian Bocock, Vice President of Product Management at Naturipe Farms, about the industry perspective on cranberry and blueberry fruit quality, respectively.

For Serres, fruit quality is rooted in consumer satisfaction. And that starts with a consistent, quality ingredient—the cranberry. 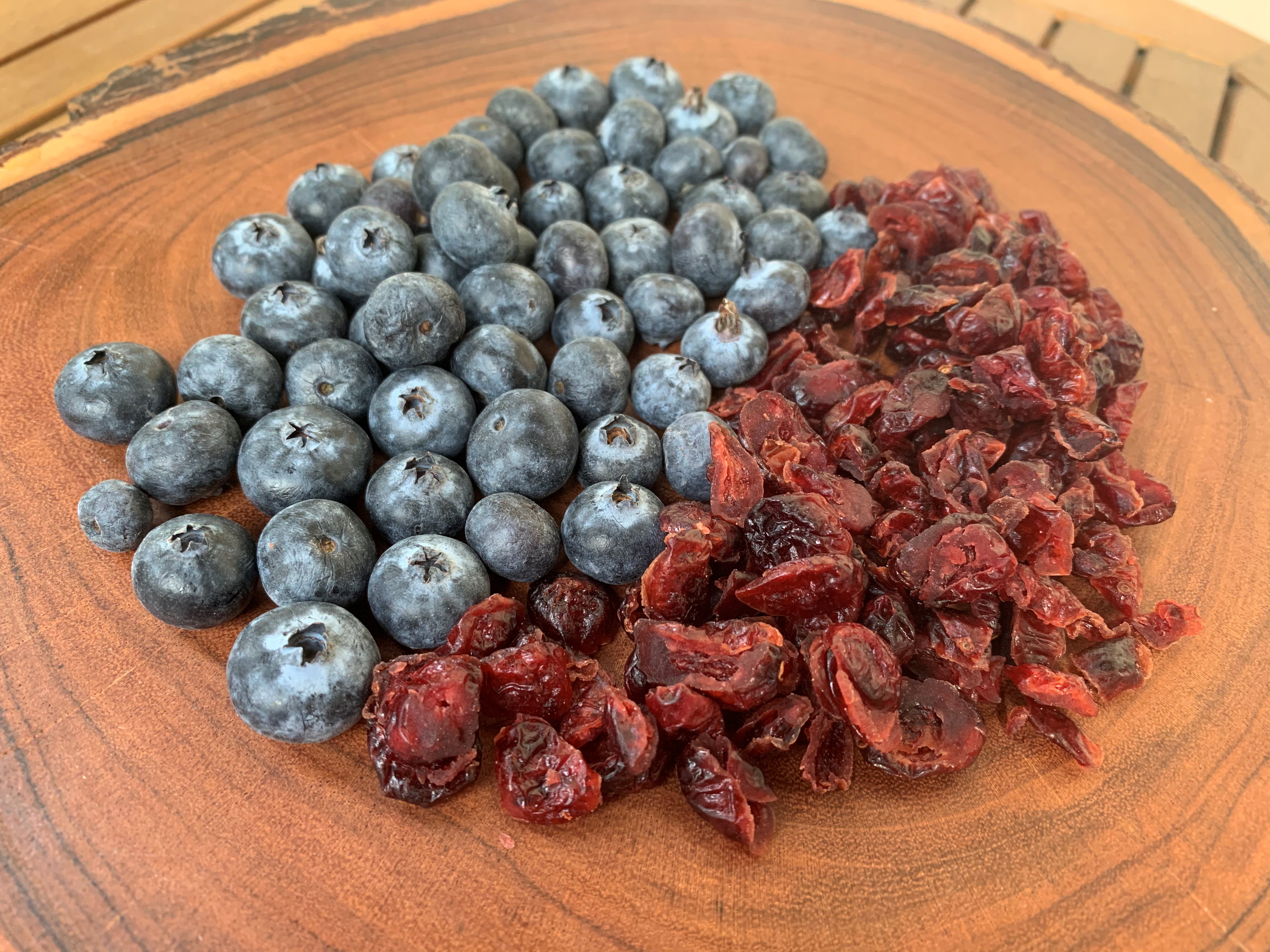 “When consumers buy fresh cranberries, they are looking for sound, uniform red fruit,” Serres said. “So that’s the big thing that hasn’t changed for years; fresh cranberries during the holidays are a tradition for many families.”

But even consistency and tradition are variable based on where in the country you live.

“Wisconsin berries are generally larger than those from other regions. While Massachusetts has ‘Early Blacks’ and ‘Howes’—which are much smaller berries, almost half size berries,” Serres said. “And one time, we had some fresh cranberries from Wisconsin stocked at grocery stores in Massachusetts.  We had a few calls asking what type of cranberries these were, and if they could get their regular size cranberries. The consumer usually sticks with what they’re used to when it comes to the cranberry fresh fruit business.”

However, what quality means when it comes to the processed cranberry business has changed significantly in the last two decades with the introduction and consumer demand for sweetened dried cranberries (SDCs, commonly referred to as Craisins™). The cranberry industry was dominated by the juice market up until 15 years ago, but that all changed with the arrival of the SDC.

“Now, virtually every berry needs to become an SDC,” Serres said. “When we started needing fruit for SDCs, each individual berry needed to have full color and the size of the berries became an important trait, since larger berries are better for slicing to make the SDCs.”

The development of this new product changed the definition of fruit quality from the qualities of a ‘lot’ of fruit to the qualities of an individual berry.  And now those important characteristics included not only color, but size and firmness. It also strengthened the connection between efficiency and quality, posing the question: what is a good quality characteristic that would increase efficiency and increase consumer-based quality of those products?

“Efficiency is the other big thing as far as fruit quality goes,” Serres said. “How can we produce the products more efficiently? And in the case of Ocean Spray that has a variety of cranberry products, how can we get several different product streams out of the same fruit?”

Quality also takes on a different meaning from the processing side of things. With the need to get more product out of the same berry, size has become a critical trait. Getting more slices per berry increases efficiency and reduces waste, and it has producers looking at aspects of a berry they never thought of before.

“We had little interest in size as far as juice goes. But now it’s important, so we would like larger berries,” Serres said. “We need to be careful in breeding programs though. Dr. Juan Zalapa has identified variability in vacuole size [those air pockets in the middle of a berry], which we almost never paid attention to before.  It matters now because SDCs need the flesh not the vacuole.  So, a large berry with a lot of flesh is going to be much more valuable than a large berry with huge vacuoles.”

Firmness of berries also has more emphasis now. A firmer berry makes it easier to slice for SDCs after they have been frozen. If a berry is too soft or overripe when frozen, it will not keep its integrity once it’s thawed, and the skin will separate from the pulp. This prevents them from getting back into shape after being sliced, something important for producing SDCs.

Uniformity—especially of color—has always been an important trait for fresh fruit, but fresh fruit accounts for only 5% of all cranberry production. Color has definitely become more vital over the years with the increase in demand for SDCs which require full red color of each individual berry.

“Anything from a breeding program, or anything from a cultural program that promotes uniformity among all the fruit in a bed for key quality characteristics will be valuable,” Serres said.

All of these characteristics—and understanding what controls them genetically—is even more important as the industry looks to market innovative cranberry products to consumers. Serres says the industry is always looking to give consumers something new and exciting in cranberries.

That could be everything from non-red or low acid cranberries to a whole diversity of new products like cranberry powder or seeds—enhanced with omega three oils—that could be used in breads and muffins.

But even with the highest of quality cranberries, it isn’t as simple as putting it on the shelf and hoping it sells. Serres says that consumers, faced with lots of choices, are going to have to be directly marketed to, so they see cranberries as the best option for a healthy refreshment, snacking, meal accompaniment, baking and whatever else is down the innovation road.

“I think the mindset here is we’re going to have to go all out and say this is the next best thing since sliced bread,” Serres said.  “When it comes to cranberries, it’s an education marketing effort that you have to go through. Otherwise, it takes decades for it to catch-on on its own.”

Over the last several years, what has defined fruit quality in cranberries has evolved from a simple red fruit needed for juice to needing large, uniformly red, firm berries capable of being transformed into a myriad of products. And with new, innovative products constantly on the horizon, that definition of cranberry fruit quality could see another transformation in the coming years.

Texture, firmness, and flavor—that’s what makes a quality blueberry according to Bocock.

When a consumer bites into a blueberry, they don’t want something that is squishy and soft. It doesn’t make for a pleasant eating experience. That makes texture a priority in blueberry quality.  And imported blueberries bring that even more to light.

In the last decade, there has been an increased adoption of southern high bush cultivars that have higher quality texture attributes (e.g. crisp) in southern US states and South America (Peru, Mexico, Chile). The uptick in these cultivars—which were developed in the US—likely fueled the US market and contributed to a new fruit quality experience for US consumers.

“Eight years ago, no one knew about blueberries from Peru,” Bocock said. “And within the last five or six years, all of a sudden here comes this consistently large piece of fruit with good texture, that almost crunches in your mouth.”

But the imported blueberries from Latin America lack flavor, compared to the US blueberries, which is also a very important fruit quality characteristic.

“Imported blueberries from [Latin America] are not the perfect blueberries. But they are better than a lot of the late season blueberries from North America,” Bocock said. “When the flavor is at least as good and the quality is similar, the texture just makes all the difference in the world.”

Flavor is still a prominent and interesting characteristic for blueberries, given their profile. According to Bocock, roughly 75% of the American palate prefers a sweeter flavor with just a touch of tart, versus tart with a touch of sweet.

Bocock believes texture trumps flavor in the eating experience but are both key in terms of quality.

“If texture didn’t trump flavor, blueberries from Peru would have not become as successful in the US market as they have,” Bocock said. “Blueberries from Peru looked great. It popped in your mouth. But the flavor was not necessarily there. However, they are still very successful. I think texture is one [characteristic] and flavor is one, and that they’re really closely attached to each other.”

Latin America entering the US market was also a gamechanger in what consumers began to expect of blueberry quality over the last five years. This has led to a diversion from decades of the status quo and blueberry breeding programs popping up all over the world. The advances made in texture highlights how important this trait will be for US growers and is why the VacCAP team is including texture in their work.

Bocock notes that the consumers’ definition of quality is always a matter of what you’re comparing yourself against, such as imported berries from Latin America.

“It’s all been driven by the consumers expectations by the retailer’s desires,” Bocock said. “And so, the retail is the gatekeeper to your refrigerator, right? But they are a reflection of their consumer.”

Demand for bigger berries is one result of that, with consumers expectations shifting to larger fruit. This may lead to them carrying a premium in the marketplace in the future and trigger more selection pressure for size on the grower’s end. Unless they have powerful flavor, smaller berries could fall to the wayside.

“If you see a smaller berry, it’ll sit on a shelf a little bit more, unless you can really call out flavor,” Bocock said. “If that smaller berry can really deliver a powerful punch on flavor, your marketer should call that out on the package and the consumer should experience that flavor differentiation. If successful, that will be something that would trump the size. But other than that, if flavor, texture, and firmness are consistent, then the large one will become the consumers’ expectation.”

At the end of the day, fruit quality and how the industry defines it often relies on the consumer. Without a customer, you don’t have an industry.

“When’s the last time you ever went into a produce department and saw any item it had mold? Or the bananas had a whole bunch of dark pits on it. And the apples had pitting on it. And you said, am I buying that and paying full price’?” Bocock asked. “The answer is never… That’s why quality is important. Because if you do not deliver something that’s going to meet the consumers expectation of quality—and that’s key, that consumers’ expectation on quality—you’re not going to have an industry.  Period. End of story. You can yield 100 million pounds to the acre. But if consumers walked in and said, ‘That is nasty,’ it isn’t going to survive.”