Breeding for a Machine Harvestable Berry

By Josie Russo, University of Wisconsin-Madison 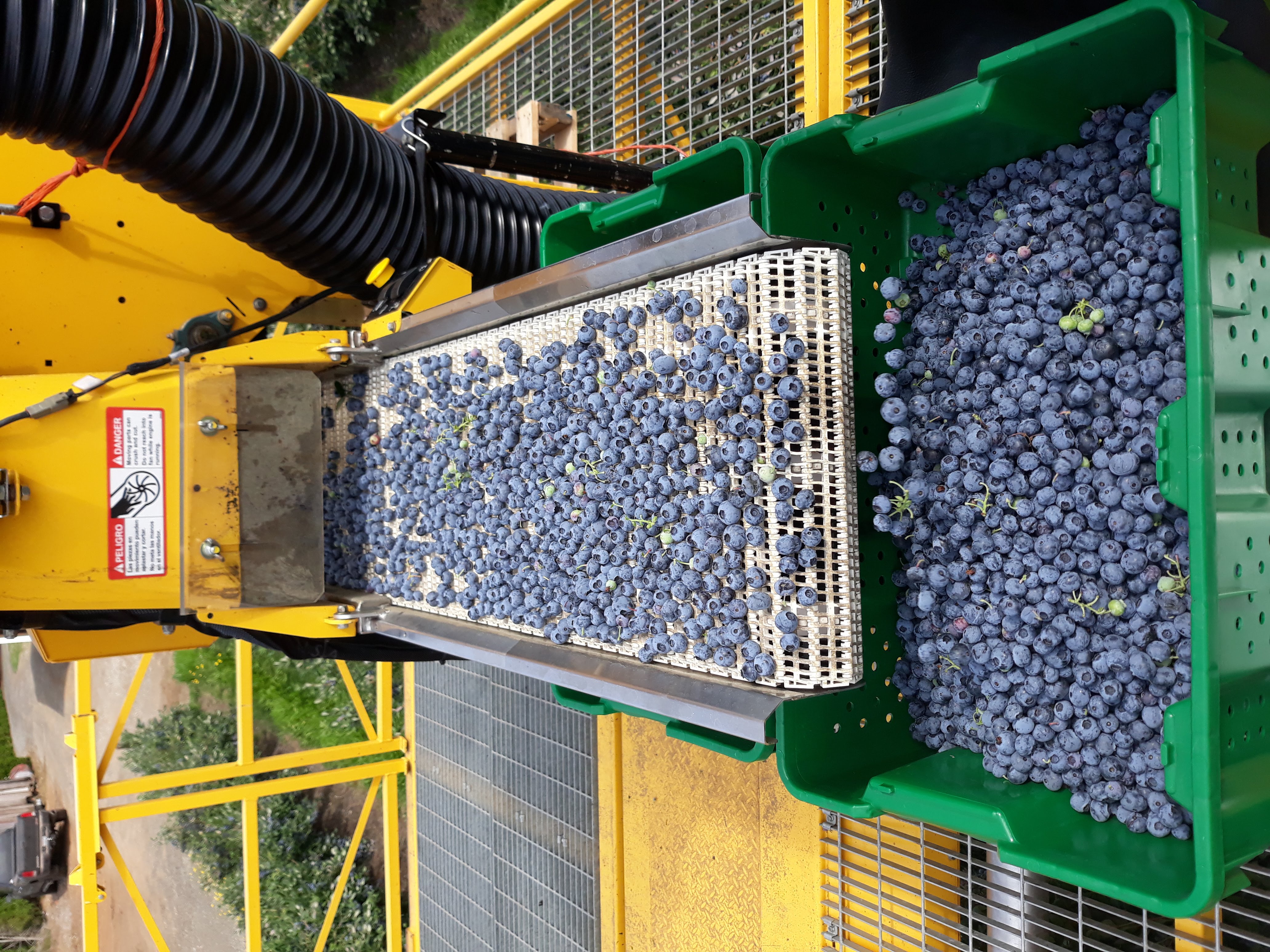 Increased labor costs over the past few years have more growers looking to turn from hand-harvesting to machine harvesters. But traditional machine harvesters cater to the processing market where fruit durability and bruising are not a concern.

Many blueberries can get damaged during the traditional machine harvesting process—up to 60 percent, in fact. While this damage doesn’t impact the domestic fresh-markets with short shelf lives as much, it is not conducive for important export markets and storage over a longer period of time. Damaged berries are lower in quality and will have a shorter shelf life, which can result in another financial hit for growers.

So, how can we make blueberry harvesting less complicated and more cost effective? There is no one, simple solution. It is a perfect storm of tweaking and refining different factors, from adapting the harvesting equipment all the way down to improving the fruit’s genetics.

Researchers are trying to find out if there is a way to combine the cost efficiency of new machine harvesting technologies with the quality of hand-picked blueberries. Dr. Lisa Wasko DeVetter, a VacCAP Co-PI and Associate Professor at Washington State University, is working on another project that aims at implementing “soft-catch” technology onto machine harvesters, using softer materials on high impact sites to reduce damage to the berries. But the machines are only as good as the fruit they have to work with. Different cultivars have different reactions, but overall, new cultivars that do not bruise as easily are desirable. That’s where the genetics comes in.

Dr. Patricio Munoz, a VacCAP Co-PD and Assistant Professor at the University of Florida, is tackling the challenge by developing improved blueberry cultivars with a focus on firmness.

“Plants need several characteristics to be considered a good machine harvestable. By far, fruit firmness is the most important. If you don’t have firm fruit, nothing else matters. You’ll just get jam if it’s not firm.” Munoz said.

And it sounds like they’re making good progress in that aspect.

“We did a review of fruit firmness from all the blueberry cultivars that have been released since the beginning of the domestication of the species and had data in the literature,” Munoz said. “It showed a linear trend in firmness improvement for all low-chill varieties. Almost all varieties—over 30— can be machine harvested, as conformed by growers and machine harvest service providers, with the exception of two cultivars, and those two cultivars are known to have soft fruit.”

While advances in fruit firmness among new cultivars is progressing, Munoz says the next issue is going to be how to reduce fruit loss to the ground during harvesting operations. Other relevant traits needing to be addressed include how easily the fruit releases from the plant and bush architecture.

“Almost all blueberries do not produce a single trunk; they have lots of canes. It would be easier to machine harvest with a single trunk,” Munoz said. “With multiple, spread-out canes, this creates spaces for fruit to fall to the ground when using most current machine harvesters.”

There is a lot more variability in the architecture of blueberry plants to work with to help address this, though. Munoz noted the extreme differences in the more tree-like Meadowlark cultivar compared to very bushy cultivars  that many associate with blueberries.

Growers can modify plant architecture to better suit machine harvesting by pruning, using cartons or zip ties to narrow the crown after planting, and/or using a trellis system. However, this requires additional labor and costs. Having an optimal plant architecture through genetics would be more cost-effective for growers who are already dealing with thin margins.

At the end of the day, the key goal is to improve cultivars as a way to keep blueberry harvesting successful and cost-efficient for growers.

“In 2017, we released a cultivar specifically for machine harvest for fresh market (cv. Optimus). This trait has become a standard practice to check for in new cultivars, such as in ‘Colossus’. We hope to keep developing cultivars that can be machine harvested,” Munoz said. “That’s the objective of the program and the main goal is make producers be more profitable and stay in the game.”